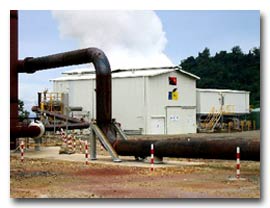 “Gold company Lihir Gold Limited is turning its vast geothermal resource into an opportunity. In April, the company started commissioning a 6MW geothermal power station, the first in Papua New Guinea to use natural geothermal energy for the generation of electricity.

Located on Lihir Island in New Ireland Province, all of Lihir Gold’s gold reserve is, to some degree, in geothermal zones. The company has successfully managed Lihir’s geothermal resource so that mining is feasible in areas once considered too hot and, now, following extensive studies, it is using geothermal steam for power generation.

Four steam wells, initially drilled for the purpose of cooling and de-pressuring the mine, will provide the steam required for the power station. The Lihir power plant requires over 100 tonnes of steam per hour to operate at maximum capacity. The 6MW produced represents about 10% of the gold operation’s total power requirements.

Based on last year’s spending on heavy fuel, we expect to save over US$2-million a year following the commissioning of the geothermal power station.”

A compact lube oil console was designed solely by GDA. It provides lubricating oil for the turbine generator set during both normal operation and in an emergency shutdown situation. The console features AC & DC motors, a centrifuge, a 300 US gallon reservoir and manual/automatic control system components. 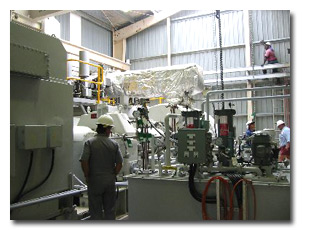 In the picture at left, the lube oil console appears to the right, alongside the turbine generator set.

GDA assembled and wired a remote control panel (shown in pictures below). The primary features of the panel are a Quantum PLC, a Woodward electronic governor, a Multilin generator protective relay and an excitation control system. In addition to the turbine generator set, the PLC controls and/or monitors the gearbox, lube & hydraulic oils, cooling water and steam valves/lines. Manual control of some systems is allowed at junction boxes mounted on or near the equipment.

The picture on the left below shows a close-up of the electronic governor, which allows automatic or manual control of plant synchronization to the local utility lines. The screen shows the turbine-generator operating at its design performance of 6000kW.

In the picture below (right), there is an insulation blanket over the top of the turbine. The silver wrapped piping transports the inlet steam from the geothermal wellfield. On the left side of the picture, the speed reducing gear that connects the synchronous generator and turbine is barely visible. A gauge board for monitoring turbine pressure and temperature is shown on the right.